In celebrating the one year anniversary and the release of the paperback version of Alexis Okeowo’s important work “A Moonless, Starless Sky – Ordinary Women and Men Fighting Extremism in Africa”, I thought I would give you a quick review and tell you why this is a book that you need to read.

As usual there will be no spoilers in this review, so you can go into the book knowing that the accomplished author alone will guide you through this engaging and informative 236 page journey. 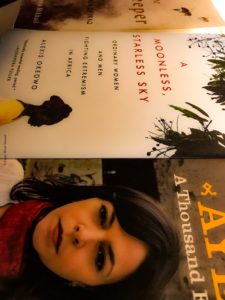 Alongside books such as “A Thousand Farewells” by Nahlah Ayed and “The Beekeeper” by Dunya Mikhail, Mrs. Okeowo’s work stands with many important works of journalism covering aspects of our humanity that most would rather not think about.

Growing up in Alabama to parents from Nigeria, Mrs. Okeowo like many other talented and other revered journalists had gone back to report on the events in the country of their family’s origin. Another journalist who is a foreign correspondent for the Canadian Broadcasting Corporation who continues to do so is Nahlah Ayed. I highly recommend her work in “A Thousand Farewells – A Reporter’s Journey from Refugee Camp to the Arab Spring”. She gives the reader a view into the the Palestinian refugee camps of the past and today, and that of the events during the Arab Spring. Mrs. Okeowo also covers matters closer to her home today such as the recent elections in the United States. All the while covering events abroad such as the #BringBackOurGirls protest which is still ongoing in Nigeria against the lack of action against Boko Haram and the kidnapping of 276 school girls in 2014. 112 of these girls are still missing.

A fair warning, Mrs. Okeowo’s book does require a bit of a strong stomach near the beginning. I plead with you however to power through the first couple of chapters. The sometimes gruesome scenes are not purposefully written merely for effect, they are presented to you for they happened and played a very important part in what horrors these people faced, and more importantly, under what circumstances they lived under for a large portion of their lives. Thus us the reader would then have a greater appreciation for their torment and the ever present role of trauma and how it impacted the daily lives of who we are about to follow.

Taking notes on such books always proves difficult due to the having to return to the at times difficult subject matter at least three times.

This book is broken up into two parts. Both sections follow groups of people who are fighting extremists in Africa in varying circumstances. First is the very unlikely couple of Eunice and Bosco in Uganda which had to overcome vast challenges to build a life for themselves and their family from the “Lord’s Resistance Army” which is one of the cruellest extremist groups in existence. The LRA utilises warped Christian views to indoctrinate their soldiers and followers. We are then introduced to Biram in Mauritania which fights as hard a he can against an unwilling government and a malformed brand of Islam which condones slavery. Next we are introduced to Rebecca which was kidnapped by the infamous Boko Haram, and to Abba Aji Kalli who would later be known as simply Elder. Elder had to learn how to fight one of the most horrific and still menacing forces in Boko Haram who use their fanatical Islamic teachings to terrorise Northern Nigeria. Lastly we are introduced to a vibrant young girl in Somalia named Aisha who like many has a passion for playing basketball, but had to contend with Islamic extremists who viewed women playing sports as blasphemous, and worthy of punishment by death in some cases.

Where the first section of the book introduces us to the people who you will be following, you are also treated to a short and effective history lesson of each country. The second section of the book is where Mrs. Okeowo and her book shine in an unexpected manner. Here we become acquainted with how the author came to know each one of these wonderful people and more importantly, the burden she undertook in bringing us their stories.

Getting to meet these families face to face and hear about their traumas first hand weighed heavily on the author. We the reader should be grateful for her tireless work in bringing us all of their detailed and powerful stories. Especially when you consider how the traumas and their effect never end. Some of these victims are treated as outcasts within their villages and towns, and the highly adverse effect this has on their beautiful children is profound to say the least. The matter of trauma crossing generations and the scars left behind by extremists long after their reign of terror that ravaged a region is gone that can not be understated. Mrs. Okeowo masterfully covers this the topics of PTSD and generational trauma. Personally having had the opportunity to have met many people who have immigrated to Canada from such countries, and to have spoken at length with Holocaust survivors and their children, cross generational trauma is a very real mental health issue that is not given enough attention to sadly.

While reading this book, the terrible assassination of the journalist Jamal Khashoggi took place. Mr. Khashoggi was critical of the Saudi government and at the time of this writing more evidence and findings are appearing to confirm that he was indeed assassinated by the Saudi Government, and most likely directly by the Crown Prince in a recording demanding that “he be silenced.” Not only is this incident highly alarming, the reaction from certain governments and indifference shown on the matter as more time passes by the general public is deeply disturbing. As I progressed through the final chapters of this terrific book I naturally started to feel concerned for the author in a way that was not covered in the book. She covers many matters globally and does so in quite possibly the most admirable way, and like all foreign correspondents and journalists could one day be in danger.

In covering the the Nigerian Government’s lack of concern over Boko Haram and how it actually benefits the current President if the northern region is constantly unstable by this horrid group gave me pause and distress for the author’s safety while in Lagos. Journalists such as Mr. Khashoggi, Mrs. Ayed and Mrs. Okeowo are one of humanities most prized accomplishments for they help keep our humanity intact by offering us a window into parts of the world that would otherwise go unseen. Thus, all the lessons learned from these regions and the ability to do anything to help would recede into the darkness. 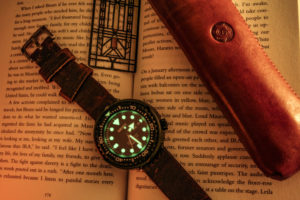 This powerful book at first glance might not be the best bedside reading, but you would be wrong.

Regardless of which continent you reside in, you are more than likely just like most other people. You are doing your best to get by and to support your community. Whether that is just your family, or something bigger if you have the capacity to do so. Sadly I have noticed an ever increasing number in people who barely have any time for themselves, let alone to spend the time reading about the distant troubles in another continent. The irony of this is obvious in that such information is more readily available. To be honest, after speaking to a number of people on the matter, they admitted that they only skim the headlines and soon forget what they read after they put their tablet back to sleep in their washroom.

I encourage and implore you, the reader, to not only read past the headlines presented to you on your favourite news feed, but to explore such books as this as well. Being educated about the details of the struggles of those from abroad only allows us to better take care of our own communities. It also gives us better tools in welcoming those who have escaped such horrors and are now our neighbours. These journalists are needed now more than ever in shining a light on the injustices of the world to not only inform us about them, but to enable some action on any level by those who can afford to do so. Whether this be at home with greater empathy and understanding for immigrants and refugees, or to spark a flame within you to make a difference abroad.