As much of the attention of the early days of spaceflight focus on the test pilots with the right stuff and the Apollo missions, it is a shame that the many stories of the numerous hard working people before NASA are not known to the general public. Here is where historian Amy Shira Teitel steps in to masterfully take you through the trials of many engaging people, their amazing endeavours, and how they gave their lives to the cause of making spaceflight a reality. 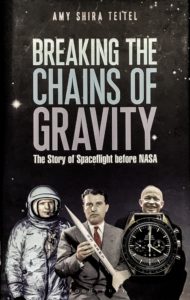 Upon reading through “Breaking the Chains of Gravity: The Story of Spaceflight before NASA” one gets a familiar feeling. This feeling is of being taken by the hand by a master historian and writer like David McCullough and before knowing it reaching the final chapters of the book fully engrossed in its pages. As the truly esteemed Mr. McCullough has done and continues to do for American History, Ms. Teitel does the same for the days of pre and early spaceflight. Where Mr. McCullough made topics such as the building of the Brooklyn Bridge, the Panama Canal and of course the life of John Adams fascinating for us laypeople through extensive research and the use of letters and correspondence, Ms. Teitel does so through her expansive research and sheer writing prowess.

Putting you in the shoes of those in charge of the first rockets in pre-Nazi Germany is not an easy task. Doing so as the decades and their efforts and the growing cast list of stellar human beings grew would only get more difficult. By starting some chapters with the history of the scenes and the environments in which these events took place, you as the reader are fully immersed in every detail. As a result these historical figures and their actions as they emerge become very real and their welfare and efforts have real substance and consequence for the reader. Many non-fiction books fail in doing this, thus making the experience dry, and that is not something you should be concerned with here. The only downside that the reader may encounter is that some of these chapters describing these historically important settings, like Muroc and the brilliantly described history of the Kensington Palace Gardens for example, may prove problematic for those who read this book over a long period of time. Getting back into the book and starting one of these chapters that seemingly has a large time jump backwards, would require some to go back a few pages and refresh their memory as to where they left off. This will not be a problem if you have a constant reading schedule, whether this be on your favourite chair every night or on public transit everyday. You will actually be grateful for this and how Ms. Teitel immerses you into the scenery, the time, and how it all came to be.

The book mainly focuses on the work of Wernher von Braun and Walter Dornberger who were the leading scientists in rocket research in Germany. Due to the unfortunate Nazi Regime, they had to work and experience some pretty harrowing events in order to see their research progress. Having to deal with the likes of Hitler and Himmler first hand while your intention for your research was for exploratory and transportation purposes, and not of military weaponry, is an experience that would make almost any office work environment seem bearable these days. Their efforts during these years under this regime highlight their character and how they genuinely cared for their staff and not only for their work.

After the Second World War, these two scientists made their way to America (Dornberger unfortunately had a longer and much more unpleasant route) where their talents were put to good use. Along the way you’ll meet amazing people such as Vera Winzon who might only get credit for her funding efforts of the ManHigh Project for example, but in reality she and her small army of women rescued the project with their very hands when the project was under threat. You’ll also meet the famous Chuck Yeager, the determined Albert Scott Crossfield, and a young Neil Armstrong and learn about how they worked very hard to be where they were. You will cross paths with the very brave John Paul Stapp who not only designed experiments to see the effects of high G-loads and potential radiation on the human body, but how he put himself in the driver seat exposing himself to risk, injury and near death experiences. His work on pressure changes and how to avoid the bends is one that astronauts and scuba divers alike owe their lives to. 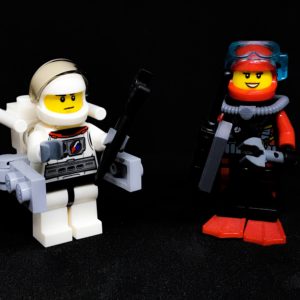 The research done by Stapp not only had applications for astronauts and test pilots, but that for scuba divers as well.

By being introduced to these exemplary humans the reader gains an appreciation of what it takes to be a scientist in this field, or a test pilot. They have to make split second decisions while on the mission that would make everyone else abandon the efforts and find the quickest route to a washroom for some much needed relief. These amazing examples of humanity have the wherewithal under extreme pressure to take into account all the risk factors at hand, and weigh it against all the work that has gotten them and their team to that point. Thus moving forward if there is the slightest chance of success. Most simply credit test pilots of this and more modern eras with simply being courageous, but do not take into account their higher levels of cognitive capabilities and capacities to operate so well under such extreme conditions to ensure the success of their missions and their projects.

These many projects that were undertaken clearly show their impact on modern spaceflight and their direct lineage to the very vehicles and equipment in use today. 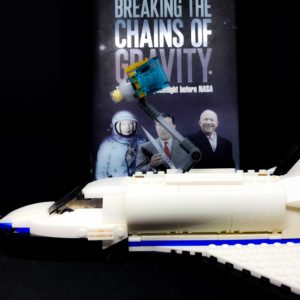 The direct lineage of the work done by Dorberger for instance can be seen in vehicles in use today.

The challenges in breaking the sound barrier and of maneuvering effectively in the upper atmosphere also resulted in some pretty impressive technology. We often even see such technology on display in science fiction programs when a shuttle is docking into a station for example. In the efforts of not spoiling what these and many other advancements were, they shall be unnamed so you can discover them first hand while reading the book.

As the progress of the many projects that resulted in the eventual creation of NASA were being hampered by international events and conflicts, President Eisenhower did his best along the way to make the age of spaceflight not only a reality, but a peaceful one. Ms. Teitel goes onto skillfully illustrate the very tense atmosphere of the Cold War and how the successful launch of the Russian satellite Sputnik impacted the world, and how the Americans and von Braun responded.

If you are new to this topic and interested in learning more about NASA and spaceflight in general, it would be wise to read this book first, followed by “The Right Stuff” by Tom Wolfe and lastly “Endurance” by Scott Kelly. It is easy to forget the efforts of those before the days of NASA because of the coverage, movies and the utter excitement around the Apollo programs. 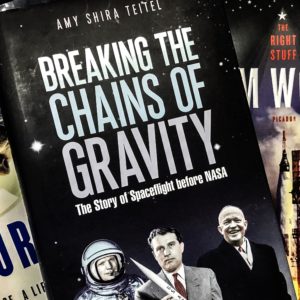 Reading this book will not only make you appreciate the events that took place afterwards more, but it will open a window to a time in history where excitement and wonder prevailed and  merit more attention.