A Problem From Hell

Works such as the Pulitzer Prize winning “A Problem from Hell” by (quite possibly one of my favourite human beings) Samantha Power are vital in expanding the personal bandwidth for those who are nearly over encumbered with their local concerns about their community. Yes I’m not too proud to admit that I am a Dumb Dumb that needs all the help he can get. 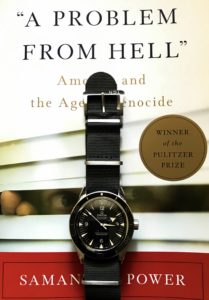 Masterfully written (unlike this post), Power covers the last couple of decades where crimes against humanity were mishandled by many parties.

One of the gifts which this book imparts on its reader is the ability to start seeing signals for atrocities, ethnic cleansings, genocides and humanitarian crises, and the ability to not ignore them. More importantly however is the capacity to not forget and keep oneself informed as time inevitably marches on. Such signs are that of mass migrations of refugees, and governments limiting media access while trying to control the optics with often very vague and razor thin messaging.

Today such examples exist in Myanmar where the Rohinhgya minority are being pushed out into neighbouring Bangladesh at staggering numbers (UN reports 313,000 since 08/25 with a further quarter million being displaced and under threat). Also in Yemen where due to the regional proxy war a quarter of the 28,000,000+ population are dealing with a famine and an ongoing cholera outbreak, and over two thirds of the population is experiencing massive shortfalls in clean water and food.

I am personally indebted to writers such as Mrs. Power for such works and will continue to try to seek out works such as hers and share them with you.