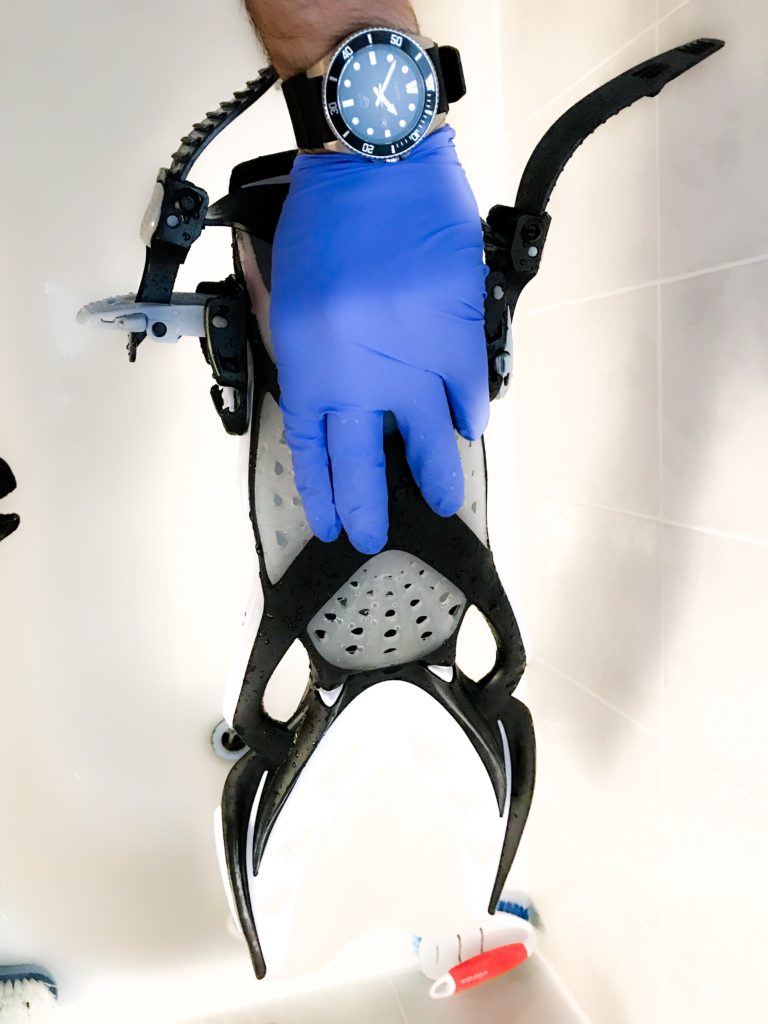 Successfully saving my fins from being immersed in sewage.

“Umm, I think we may have a problem,” said my guest as she slowly emerged from my main washroom.

“I think I should have stopped at the fifth slice. Do you have a plunger?”

Springing into action I ran to the washroom, plunger in one hand, the other plugging my nose, and then I remembered something. Unknowingly I did my best Darth Vader yelling “Noooooo” impersonation as I sprinted down to the basement. My fears were justified.

The soiled water was making its way ever so slowly towards my dive gear which were still drying in the guest bathroom tub!

Quickly removing the fins and boots from the tub, I ran back upstairs to retrieve the cleaning supplies only to see my guest going for her eighth slice. Not even stopping to comment I made my way back downstairs and managed to save all of the gear and clean up the mess.

Only to hear a flush from upstairs as I finished…

This is where wearing a $60 Casio Dive watch came in handy. Without having to worry about what would happen to the watch I was able to reserve all of my efforts into saving my dive gear. Due to the nature of the contaminated water, this could have made some of the gear unusable afterwards.

This is the true benefit of wearing a cheap watch daily. Amongst watch collectors, many like to ponder over what “beater” watch they would get and inevitably the answer is either a Seiko diver or a G Shock. I think this Casio “Duro” MDV-106-1A almost, yes almost, would receive the best beater title.

Upon receiving the package on my door step, I have to admit I was not nearly as excited as when another watch makes it’s way into my mailbox. After opening it and putting the Casio on the wrist however, I was genuinely surprised. Reading and watching other reviews of this piece made me realize that I may have the “Worlds Best Casio Duro” in existence. Or so I thought at the time. 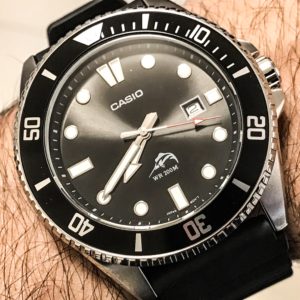 Though it was not a consistent performer, the Duro managed to work its way into my permanent watch rotation.

The bezel had zero play, the fit and finish was tighter than my Seiko Divers costing nearly five times as much, and the dial “burst” treatment added a character that had me swooning over the piece. The only parts of the watch that showed obvious signs of its low price were the crown, and the strap which would actually become a bright spot for the piece.

My initial reaction to the strap was that I was going to change it for a nato. I’m glad I did not for it was very easy to clean after the dives and especially after the incident involving my guest pushing my home’s plumbing system to its limits. The strap also became much softer after a couple of days of wear as well. If you have any plans of taking this watch to the pool or for a dive, or for everyday duties that might require harsh cleaning chemicals, I’d recommend keeping the rubber strap on this watch.

That amazing 120 click bezel that had zero play would become an issue afterwards however. “Play” is a term that those familiar with dive watches use for the movement of a bezel when it is at rest. After the first dive that I took the watch on, it essentially got stuck and gradually became movable. It was still very hard to move and would not become loose until later the next morning. At first I thought something happened to it, such as an impact or that the very slight pressure changes affected its mechanism. Thankfully the next morning after another rinse (a second run through in the shower) it became normal again, though it gained a noticeable amount of play.  It works perfectly now so if I were to hazard a guess as to what happened, the bezel failure was probably due to a piece of debris getting stuck in between the bezel and the case. The bezel itself is easy to grip when it is dry or when operating under water. If the watch and your hands are wet however, and you are not in a body of water, the bezel becomes difficult to grip and operate. My fingers would continually slip as I tried to normally turn the bezel. This became quite frustrating and uncomfortable as it required my hand to apply extra pressure on the bezel and the case to try to make the bezel turn. Not only would this result in an extra amount of pressure on my my arm, but the strap would start to stretch as it became contorted under the laterally applied pressure. I doubt that this will be an issue for most, but the smooth and thin bezel design does not allow for optimal operation within this very specific circumstance. 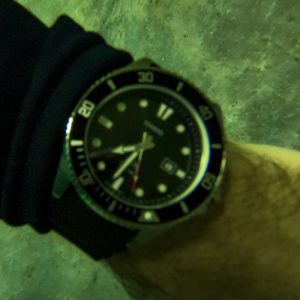 The legibility of this budget dive watch was never a concern.

Under water the legibility of the dial was fantastic and my only complaint is the red tipped seconds hand. Having taken my Seamaster 300 in the water before, I appreciated its clear white seconds hand for various exercises. With the Duro, I had to hold the watch directly in front of my mask to always be able to make out the seconds hand. This is a very small complaint, but one never the less. The seconds hand does not line up perfectly with the hour markers or the minute markers on the chapter ring, but its not so far off as to it being noticeable in normal wear, and this is common with watches within this price range.

The applied hour markers have a luminescent application and are barely adequate. By that I mean they are as adequate as a hundred horsepower in a modern day hatchback. Sure it will get you to the local grocery store and back, but if that squirrel is going to hog up that uphill residential road again, you are going to have to plan ahead with the throttle two minutes in advance. The lume lasts about two hours after coming indoors on a sunny day. During daytime, the markers do have an odd glitter texture to them. I however would have traded this in for a better luminescent paint, but I can see how someone would enjoy this as well from a purely aesthetic point of view.

The Lume upon entering the house on a sunny afternoon.

The dial itself however was a genuine and pleasant surprise. With a slight burst effect, the black dial can attain a grey colouring when coming into contact with light at certain angles. Other than the traditional Marlin logo referencing earlier watches by Casio, this dial is absolutely perfect and minimal. 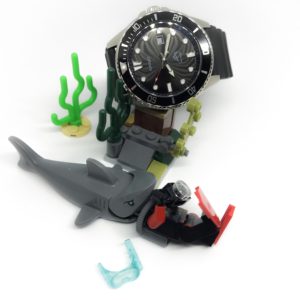 Another example of how the dials dynamism expresses itself under various lighting conditions.

The case finishing is excellent and did not exhibit any signs of wear after a very hard week on the wrist. The mineral crystal held up well and barely stands proud of the bezel. The date function works as it should, with the date wheel making a slow crawl towards its next resting position starting at 11:00pm and coming to a stop at 12:07am.

The one part that obviously shows signs of the amount of resources put into the watch is the crown. It moves quite a bit from side to side once unscrewed and fully opened. It is not nearly as bad as some plastic Swatches that cost about the same, but it is something that would be noticeable for most people who have more expensive watches in their rotation.

As a result of spending a full week with this watch it has earned a very special place in my rotation of watches. Because of its quartz movement it has essentially found a  permanent spot in my dive bag. It will be ready to go at a moments notice and has become my go to watch for the pool as well. I also would not mind lending it to someone who does not have a watch with them on a dive. You would be surprised as to how many people do not have a basic watch with them when diving. The time is usually displayed in a very small corner on some beginner dive computers, so they’ll have no idea what time it is throughout the day. I would also recommend this piece to anyone who is looking for a cheap watch that does not want the look of a digital G-Shock. The Duro looks like a traditional dive watch and does not feel cheap on the wrist. If you are comfortable with spending upwards to $300 and do not mind having a mechanical time piece as your watch to take into whatever life throws at you, a Seiko SKX is simply unbeatable. Also the SKX’s bezel has never let me down.

Wearing the watch normally was a pleasing and an enjoyable experience. Besides the slight issues that I experienced with the bezel, this watch does not look or feel as inexpensive as it is. Upgrading the strap might be a good option for those who plan on wearing it frequently, and its 22mm lug width would accommodate this easily. Though, if you do a lot of sports, cleaning or activities that may introduce the watch to odd chemicals, or human waste, do yourself a favour and keep it on the rubber strap.