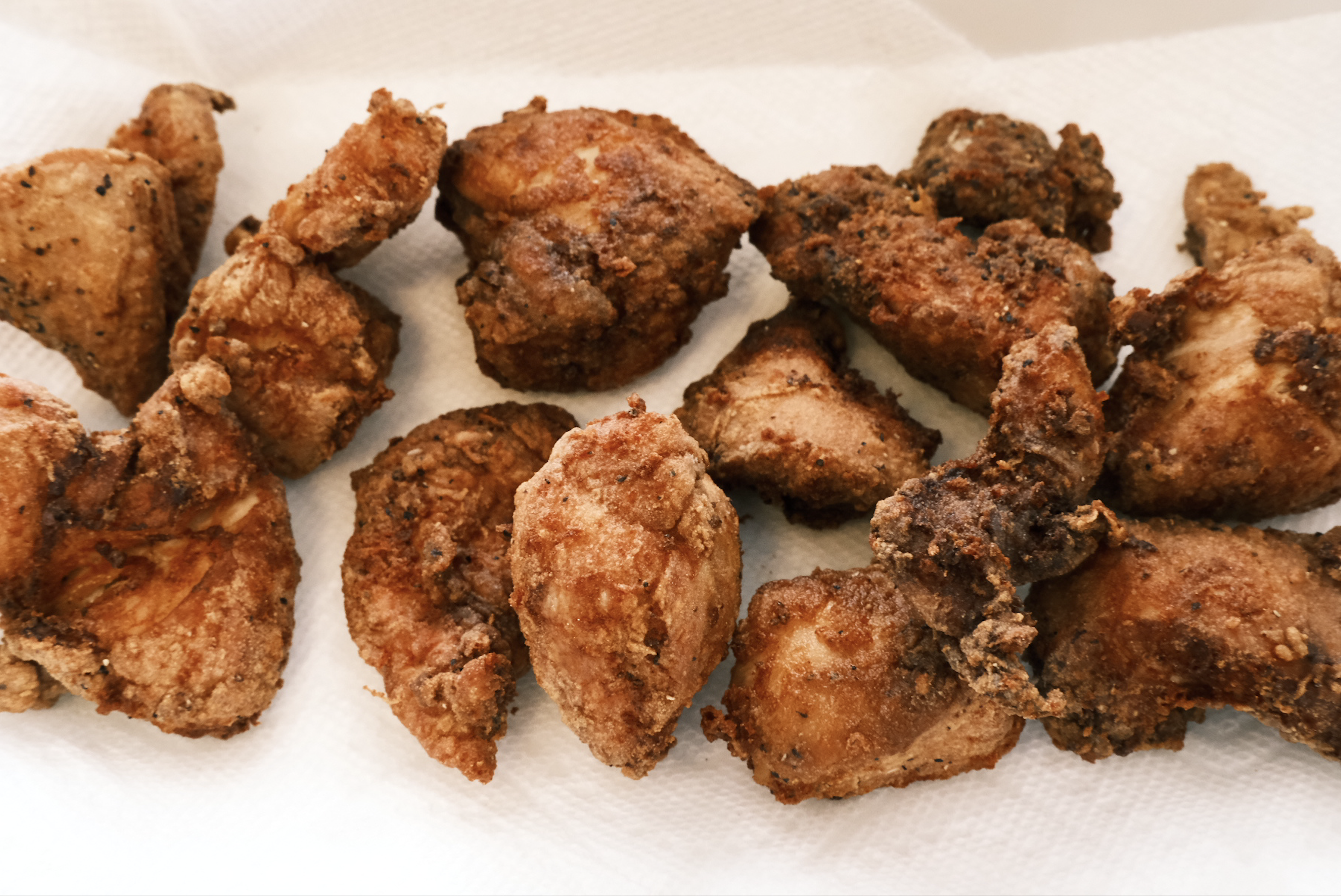 As some of the phases of quarantine are being lifted from the COVID19 crisis, people are still in desperate need for comfort when they can get it. Since at the time of this writing, many restaurants are only offering take-out or curb-side pick-up, making food from scratch at home is still preferred by those who due to varying circumstances still can not go out as often as they would like.

Thus, here is my recipe for Japanese fried chicken, also known as Kara-age (pronounced kara-ageh). Kara-age is a general term used for fried food, but there is an actual Kara-age Association in Japan, so this form of comfort food is taken quite seriously.

There are a couple of differences to a traditional version of this dish presented here. This is not due to personal taste, but that of access. Not everyone has access to an asian market, so the seasoning of mirin is omitted for instance. The same goes for the types of flour used. Here you will see an evenly portioned use of all purpose flour and corn flour, for the traditional potato starch (also known as katakuriko) is not readily available in major North American grocery stores. A very good friend told me that you can find potato flour in the kosher section of some major grocery chains. His IG handle is @ahartfie and he is probably the world’s most advanced artificial intelligence cosplaying as a human somewhere in Massachusetts. Japanese mayonnaise which only uses the yolk of the egg is substituted here with a reduced sodium mayonnaise. I recommend this type of mayonnaise for it is readily available, and the dish itself is quite salty as it is. Also, chicken thighs are used traditionally, but due to ease and for not having to buy an entire separate set of meats from my usual cooking I use chicken breast.

1 pound of chicken breasts, each breast cut into three even pieces

1/4 cup of soy sauce for the sauce

1/4 cup of sake for the sauce, rest of the bottle of sake for yourself as you contemplate your life while staring deeply into the dutch oven as you creep ever closer to the hot oil

1-2 teaspoons of course black pepper (if you do not have course or freshly ground pepper, you are dead to me)

1 table spoon of sugar for the sauce

2 tablespoons of grated ginger for the sauce

1 clove of grated garlic for the sauce

1/2 a cup of all purpose flour

Serve with rice, greens, and sodium reduced mayonnaise mixed with your favourite hot sauce as the dipping sauce. 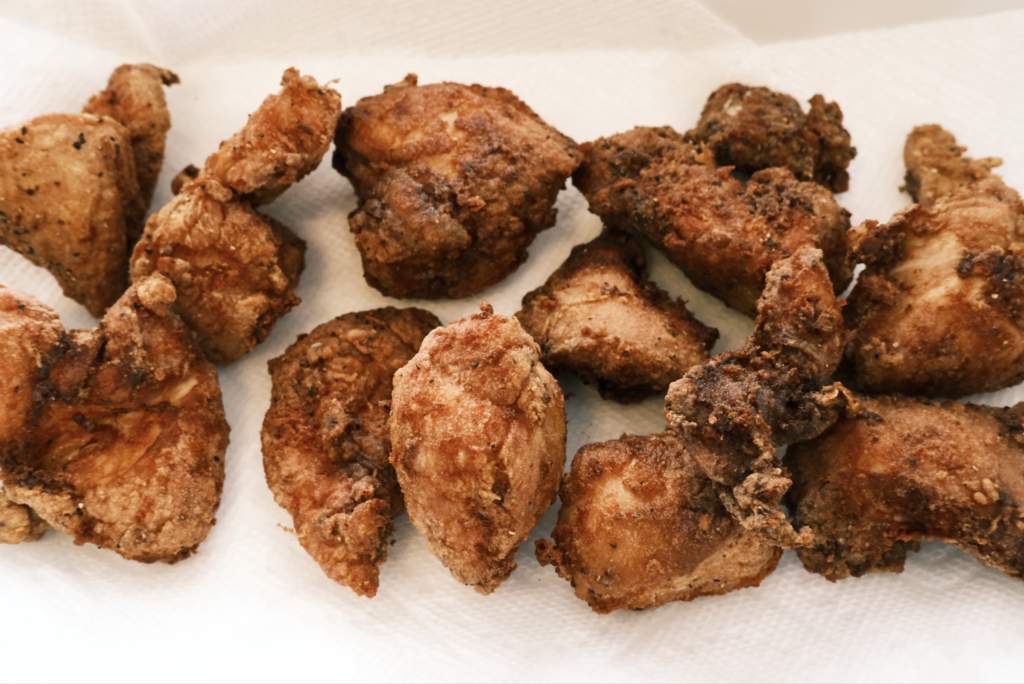 Pour the soy sauce and the sake in to a mixing bowl. Toss in the garlic, ginger, sugar, salt and pepper and mix.

Dump the chicken into the mixing bowl and mix well. Let the chicken marinate for 15-30 mins while you prepare the rest of the ingredients. Marinating the chicken for any longer actually creates a different type of dish which is more focused on the strength of the soy when compared to the rest of the flavours, and we want to avoid that.

Pour the all purpose and corn flour evenly on to a plate. If you messed up this part, you probably drank the remainder of the bottle of sake already, and I do not blame you if you did.

Preparing the oil to fry:

Depending on the your pan or dutch oven, put in enough oil to just submerge your chicken. Heat the oil to 350 F or 180 C. It is easy to tell once the oil is ready. Just drop a clump of flour into the oil. If it gathers into a small ball and floats, your oil is ready.

After marinating your chicken, lightly batter them in the flour mix and drop them into the oil for 1 min. Do not over batter the chicken for you will bite into your chicken when all of this is done and be surprised with some nice white flour on that adorable chin of yours.

Take them out and then drop them back in for another 2 minutes. Then put them back in for another 2 minutes (5 minutes total) and then place the chicken on a bed of paper towel for the oil to soak. This repeating of the frying helps capture the moisture in the chicken. The radiation of the heat will still cook the chicken, but the repeated batters will help protect the insides of the chicken from drying out. You can just leave them in for about 5 minutes while keeping an eye on their colour. I have noticed a difference in how juicy the end result is with this repeated frying method. If you like your chicken as dry as your hands after a long day of labour, then by all means leave them in there for the full five minutes, but, you are dead to your mother probably as a result (give her a call for goodness sakes).

Keep an eye on the colour of your chicken as well. If it starts to darken too much, your chicken will turn out on the bitter side.