I have had the pleasure of wearing this Seiko for a few days and thought it was time to give you my initial impressions. A full review will come in a couple of months after I have had the chance to take it under water a few times. 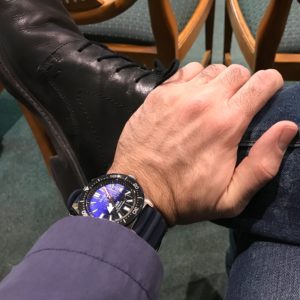 Waiting in a medical facility that smelled like Certified Pre-Owned Urinal Cakes.

First off, the fit and finish of the entire watch is absolutely splendid and worth the MSRP. I did not pay this price for I bought it lightly used from a close friend. The bezel is a treat to operate and is closer to how Rolex treats their bezel feel (that of being smooth and controlled) than that of how Omega and to a greater extent Oris do (that being of a strong and noticeable ratcheting sound that can not only be heard, but felt from across the room).

The crown is the only sore spot, and quite frankly very disappointing. It has an odd controlled and precise wobble which was worse than a couple of cheaper Seiko Divers in my collection.

On the bright side, I have never had a watch that was this colourful and at first I was not sure about how I would take to it. Well, apparently I took to it like flies to a giant pile of fresh poop because I can not take the watch off. The wave dial is executed in a manner that can be pitch black at certain angles and lighting, and can turn into a wonderful purple before turning into a mesmerizing deep blue that I have only seen from a plane off the Atlantic continental shelf. 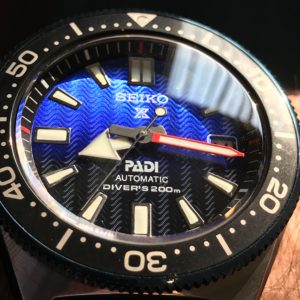 The stunning dial glistening in the sunlight proved to be a much welcome distraction throughout a difficult week.

The rubber strap is ludicrously soft and comfortable, but has two drawbacks. It attracts dust and lint for one. The second one is that it collects what a friend termed as “wrist cheese”. Me and the poor sales lady at an event who was handling the watch at the time were so grossed out that neither of us made eye contact for about five solid seconds. This, “cheese”, is a combination of sweat and skin flakes which accumulate on the blue rubber strap. It manifests itself as a very unpleasant and noticeable beige film. This is a strap that would need to be rinsed frequently if worn everyday.

The only odd thing about the watch is it’s bi-coloured lume. Sure the blue and the green are awfully pretty, but their placement is just downright hilarious. Being a collaboration between Seiko and PADI (Professional Association of Diving Instructors), one would think that the input of say, a diver, would have been used. But nope. It’s obvious that this was a design decision made exclusively by the design team while possibly being guided by the marketing department. 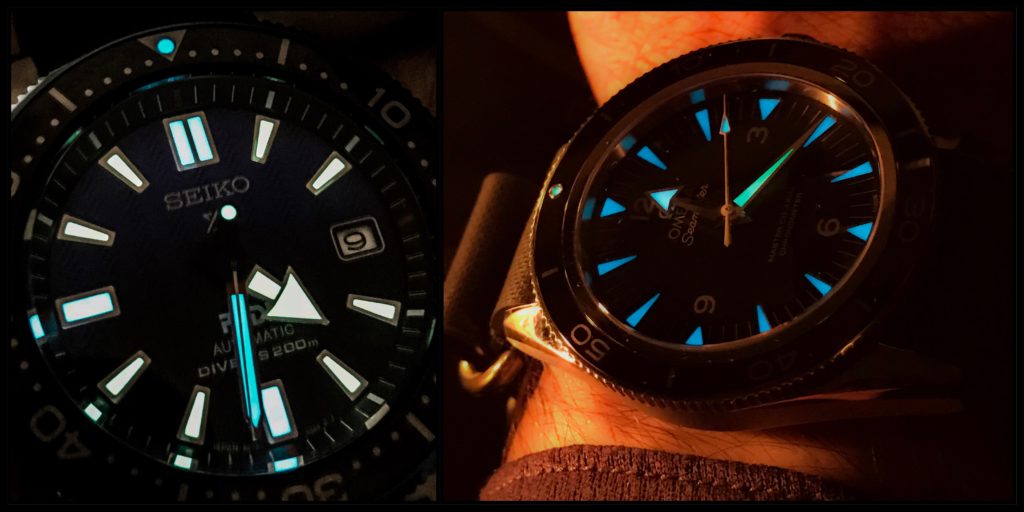 A comparison between how Omega & Seiko go about applying Bi-Coloured Lime.

The brighter green lume is used for the hour hand and markers while the dimmer blue luminescent paint is used for the minute hand, 12-6-9 hour indicators and the bezel pip. The bezel pip, 12 O’clock application and the minute hand are the three important visual indicators one is using to measure a dive time or an activity while underwater. Omega does the reverse of this, and this is correct. Personally I would have preferred for all of the luminescent paint to have been the brighter green variant of LumiBrite used by Seiko, but then again my favourite snacks are assorted vegetables so my opinion is worth as much as your subscription to this website. 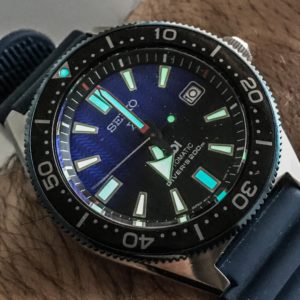 A better look at the Lume.

I started laughing upon seeing this immediately and could not help finding it charming. A genuinely stupid mistake on Seiko’s part, but a charming one never the less. The two do become indiscernible after about 40 minutes in the dark as far as colour is concerned, but the blue lume does become noticeably dimmer than its green counterpart.

The watch otherwise has been astonishingly accurate to within a second a day and I would not hesitate to recommend this and its closely related models to anyone who is considering getting one. As far as how it performs over the long haul and how it operates under water, I shall get back to you on that in a couple of months time.

Since the writing of this article, I had the opportunity to dive with the watch a couple of times which resulted in some findings, and the watch is now with a dear friend for I decided to part with it since I was no longer wearing it. I decided to no longer wear it in favour for a watch that was a lot more durable in the Seiko SBBN025.

The Seiko SBBN025 and the Shearwater Perdix Dive Computer

While diving the watch performed as it should. That being that its legibility was great, its strap and its ability to be worn on a rubber NATO were highly appreciated, and that the crown stayed in its locked position throughout the dive. This potential problem is something that I have encountered with other dive watches such as the Omega Seamaster 300 Master Co-Axial which can be quite disconcerting. This watch will serve those who choose to dive with it quite well.

The movement’s accuracy for the first couple of months ran fast around 4+ seconds which was remarkable. For another couple of months afterwards it ran 0.5+ seconds fast before starting to run 1- seconds slow. This relatively quick variation in accuracy is not something that I particularly appreciated.

The major lessoned learned from diving with this watch is that most if not all dive watch reviews are useless. A watch company has to try very hard or be absolutely inept to make a dive watch that does not perform as it should. The easy parameters which have been conquered for over four decades now and really offer no excuse to getting wrong are:

There are many watch manufacturers which get these wrong and it is not a concern for them. Most people use these watches as jewellery, or they dive so infrequently that they do not actually gain the capacity to realise how their equipment is actually performing in conjunction with the rest of their equipment and with their set and dynamic objectives while on a dive.

Would I Recommend This Watch:

I would highly recommend this watch or that which reside in the same model family made by Seiko but with one caveat. Only purchase the watch if you can see it in person. The manufacturing variances of these watches are simply unacceptable and in some cases such as having a bezel that will easily slip (experienced by a friend which was then taken care of by Seiko USA) make this watch inoperable for diving conditions. My watch had a crown which was loose and “wobbly” and thankfully this was just cosmetic. For those residing in North America, Seiko has thankfully been expanding their authorised dealer support on our continent and you should have a better opportunity of seeing timepieces such as this one in person before spending your money on one.