Smart Watches and GPS Enabled Sports Watches pose an existential threat to horology enthusiasts. Here is my experience and how out of necessity I embraced this marvellous technology and why you should consider doing so as well. 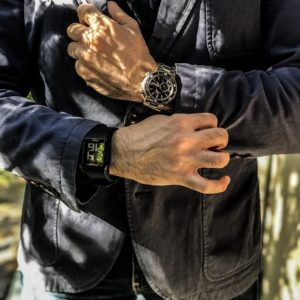 I was sitting uncomfortably in front of the doctor as he wiped his tears. Waiting for him to regain his composure I started to formulate my plan which would come into practice at an alarming rate.

“I can’t help you. I’m sorry,” he said finally making eye contact. “What will you do?”

“Simple. I’m going to build my endurance to deal with the pain and take back my life.”

After about twenty seconds of awkwardly looking at each other he extended his hand out towards me. Once I shook his hand, the next few hours were filled with a flurry of activity as I rushed out and got my first heart rate monitor.

I decided on taking control of my health after years of severe and crippling chronic pain by increasing my physical training from a couple of hours a week to a couple of hours a day. I purchased a Polar Loop2 activity bracelet and a Polar H7 Heart Rate Monitor for it was essentially the cheapest way to monitor my activity, sleep, and workouts while using a brand which specialized in the field.

After a month of seeing immediate results I decided to upgrade to their flagship model the Polar V800 for it had many more features than the bracelet, but there was a problem. It was a watch. I had always worn a mechanical watch on my left wrist and grown very attached to it. When the V800 arrived, I realized after trying it on my right wrist that I had a very big decision to make. The watch felt alien and uncomfortable to the point of causing a rash on my right wrist. If I wanted to reach my health goals, the mechanical watch had to go. Gutted with this realization I set aside my watch and even gave it away only to have it return shortly later.

Months went by and I was hitting personal bests and breaking through fitness ceilings that I thought would take years. My chronic pain management was going so well that I noticed a remarkable change in the quality of my life. I found myself rarely getting annoyed, angry or frustrated to even situations that warranted such reactions. The benefits of being visibly in better shape also had its obvious positive affects on my life as well.

This came at a very opportune time in my life for a couple of people very close to me were going through their very own health problems and required help on a daily basis. With my newfound increased endurance and strength I had no issue taking care of their concerns first before my own, and still had enough energy to handle my own daily tasks and responsibilities.

As my fitness routine evolved and expanded I soon started using a second watch, a Casio G-Shock Frogman on my right wrist for interval timing and compass directions while running. The one downfall of the V800 is that it’s interval timer and stopwatch are not easily accessible during workout sessions or even during normal operation. Pretty soon my little crisis of not wearing my mechanical watch anymore started to come to a close as I learned to wear the Polar V800 on my right wrist. This included moisturizing the irritated skin and simply being stubborn.

Ever since I have been always wearing two watches with ease and delighted to do so as well. Having a traditional time piece, usually a dive watch or a chronograph, on my left wrist allowed me to measure events such as meetings or the oven as I worked furiously in my kitchen. It does look weird and it still does feel odd having an object on my right wrist all the time, but I am grateful for having such a tool with me. A couple of my friends and a close family member also have gotten similar devices and I’ve helped them with their fitness goals as well. They however proudly only wear their GPS enabled sports watches and activity trackers on their left wrists.

For those of you who have been on the fence about getting such a device, I encourage you to get one, but only if you will use it. They are great tools that allow you to track, monitor and better plan your exercises and daily routine and to provide some insights into your sleep patterns as well. If you do not see yourself wearing two watches but already have a daily fitness routine in place, such a tool would still hold a lot of value if only worn during workouts.

Thankfully since I started down this path which was enabled by such a tool, the only visits I have had with my doctor since then only resulted in laughter from my tales of stupidity that were fuelled by my new found health.