The worst watch of the year suffers from two issues. The first is the design of the watch, regardless of which colourway is focused on (the choices of some of the themes and how they were treated were quite nice, like the Venus MoonSwatch for instance). The second was how the MoonSwatch release and continual state was and is supported by Swatch Group and my disappointment in the informed watch collector community.

First, let us cover the simple design issue with the MoonSwatch. Basing a Swatch on the Omega Speedmaster Professional may sound like a great idea in principle, but doing so in a manner that does the watch justice required more effort than Swatch Group was willing to commit to. Besides the entire going to the moon aspect of the Moon Watch, the Omega Speedmaster Professional is and was an exercise in perfect proportions and design elements. The Speedmaster’s balanced way the hands, indices, typeface, logo, subdials, dial colour and texture define it as the perfect tool watch. It is literally perfect from a design standpoint. Swatch used the ETA calibre G10 21x (x for it is unclear whether the G10 211 or G10 212 movement was used), which resulted in the subdials of the watch is either too close at the top or too far apart from the bottom register. The MoonSwatch is simply an ugly and poorly executed design.

Second is the more serious matter of how the release was and continues to be handled by Swatch Group globally. The MoonSwatch was a marketing exercise that successfully generated interest in both Swatch and of Omega. The consequence of doing a media blitz before the release in an environment of increased inflation and of watches being viewed as appreciating assets was that the employees of Swatch boutiques worldwide had to face threats, harassment, and anxiety that continue to this day. Worldwide there were violent incidents between speculators which resulted in at least one boutique having to close its doors on the release. Besides positioning a mall security guard near a couple of boutiques, there was no additional training or staffing provided for these employees. Keep in mind that these employees (not the managers) are very young adults with little to no experience, and this was a traumatic experience for some of them. I observed two known collectors (in separate instances months apart) in Toronto raise their voices and harass the salespeople. These salespeople were the ages of their children and grandchildren, respectively. All out of a sense of entitlement and wanting a plastic watch. Swatch Group should have done better, leading to my last point. 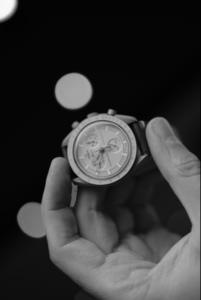 Most informed collectors knew about these issues from the first day of the MoonSwatch’s release. Instead of acknowledging how the release was mishandled, countless collectors decided to support this campaign with their wallets and buy one or many MoonSwatches. By doing so, they reinforced this reckless campaign and for more to be run in the future. In 2022, the term “collective action” was used a lot to describe the problem with many services, with a primary focus on those owned by META. Many people complained about the practices used on Facebook and Instagram but had nowhere to turn to, not because there were no other options but because the collective masses would not also change services. Thus, everyone stayed where they were at the beginning of the year, and their Vero accounts essentially became inactive. When one is informed and sees a problem happen in real-time, and most importantly, the problem relates to a non-essential product, yet they decide to support it anyways, they should simply be ashamed. Through rabid consumerism, the notion of having the right to consume regardless of the consequences of that purchase on others is disappointing for such an informed and educated group. I had many opportunities to purchase a MoonSwatch, and out of principle, I did not. I am a collector of Omega watches, and I am waiting to see whether Swatch Group learned from their lessons of this release with any such attempts in the future. If they choose to ignore the lessons from the MoonSwatch release and decide that the welfare of their salespeople is still not a priority, Swatch Group may lose me as a customer for all of their products.