From the first words of the Foreword and the Preface, the reader should get the hint that they are in for something special. Mr. Schmidt has graciously taken the time to research, compile, and write a book that must have been a massive undertaking. Those who appreciate horology at every level of expertise should take notice of this work. As such, this review is written for those with little knowledge of horology, to those who have followed the industry for years. 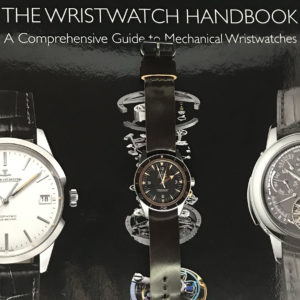 Finding information on any given topic has never been as effortless as it is now, and it’s only going to get easier. With the onset of technology, thick, well illustrated, and masterfully written books on a focused topic may no longer interest many and this is a shame. “The Wristwatch Handbook” written by Ryan Schmidt is one of those rare books that puts to shame the ready at hand information which is all but an internet search away. Not only are you not guaranteed to be receiving information that is of good standing and quality, you are essentially expending more time and effort searching, hunting and going down various rabbit holes only to come back with varying opinions of hobbyists and non-professionals of the field.

This title further differentiates itself from other books on the topic because of it’s higher quality of writing, editing, print, and its thoroughness and for covering the vast array of subjects required. Thus resulting in its versatility of usage for a wide audience. It is also priced reasonably when compared to some other books that are targeting collectors with deep pockets or Watch Idiot Savants, or “WIS” for short, who in some cases are willing to pay exorbitant amounts relative to their income on this topic. For those who are merely interested in the field of horology, to those like me who love the industry and have a couple of time pieces, to those who collect, and lastly to those who collect to their detriment, this book is all you need.

The book is laid out in a logical order starting with watch movements and their varying parts that make them function. Expanding onto the variations and different movements, Mr. Schmidt then takes you by the hand to somewhere truly special. This singularly wonderful landscape of discovery consists of the many staggeringly gorgeous complications in existence. These are the ways in which a mechanical watch has, and more importantly executes different functions.

A Nomos Orion in real life pictured here alongside a Glashütte Original movement depicting the Rachet Wheel and Click. An example of how a reader can compare his watch to the ones used in the book.

Over the last couple of years, there have been many books that have been released on the topic of horology due to its increased interest. To most, this growing popularity in the topic is quite ironic since we as modern day humans no longer need such portable mechanical marvels. To some however, this only fuels the interest and even makes it more alluring. The mechanical watch is a unique product which successfully marries art, industrial design, history, and engineering on the highest level unlike any other and one that is meant to be kept for years, and even generations. The only example that I can think of which does this is Horatio Pagani and his hyper cars which cost more than a million dollars. The mechanical watch however does this under $1000 with ease. Before one races to compare a sub $1000 Seiko mechanical piece to a Honda Accord, one should ask first whether such a commuter car has such a long ownership span and whether its design harkens to illustrate the history of the brand or a cultural reference. A $200 Seiko SKX and an $500 Tissot dress watch do this effortlessly. I know of at least three people who cherish such time pieces and value them much more than other watches costing exponentially more in their collection. Thus it is easy to see how in an ever evolving world of disposable products and experiences, why this topic thrives, and warrants such a book and your attention.

Unlike most other books that have been released recently, Mr. Schmidt offers a level of attention, detail and editing that others have struggled to achieve, or simply did not attempt to do so. Take the level of writing and editing for instance. Where some titles are actually translated from French, or the author simply did not convey anything but the facts, here one starts to get the feeling that they are listening in on a lecture by a well versed professor rather than a speaker relying on a teleprompter. By not using cheap tactics such as simply using exclamation points, Schmidt genuinely illustrates the level of awe a topic deserves. This was done in a manner that had me put the book down after reading the section on “The Resonance Watch” and the astonishing levels of science that go into these movements. I needed some time to digest what I had just read and went on to do some further reading on this topic. When a book stops you in your tracks mid paragraph making you want to learn more on any given topic, I consider it a success.

This book has gathered a bit of a reputation for being only for collectors since it covers such rare and exotic watches. This may also be due to the initial impressions received online, but this book is actually the perfect companion for a novice. Its initial section which focuses on the mechanics of the watch and how they work are brilliantly written and laid out across the page. Some of the topics covered can be exhausting for those looking for a casual read, but by wisely using negative space on each page, while being accompanied by what seems to be the best possible picture, diagram or illustration make this a relatively easy experience. Where the intermediate would enjoy reading about the intricacies of the perpetual calendar, the beginner would immediately benefit from sections such as the ones detailing the chronograph. Once again this section is accompanied by pictures showcasing the many parts of the movement, and then going on to describe how they work. Where Mr. Schmidt goes onto describing the difference between a Column Wheel or Cam/Lever Actuated movement is where beginners should take notice. In my experience, there have been a few times where someone relatively new to horology immediately asked me if the chronograph I was wearing had a column wheel. 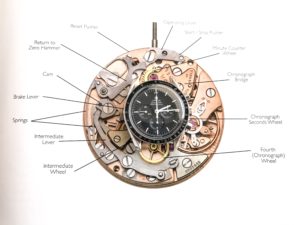 An example of how a chronograph movement and its parts are visually labelled.

When I mentioned that it did not, they surprisingly scoffed saying that they would only consider buying a chronograph if it had a column wheel. This is of course due to how this type of movement is marketed by brands and how it is written about by reviewers online and in some magazines. Mr. Schmidt goes onto point out that one is not necessarily better than the other and states the differences in ones experience in operating the two. Personally I prefer the cam/lever system for it is easier and cheaper to service.

As hinted at before, this book covers some pretty obscure and rare subjects and mechanisms that one would most likely go a lifetime without ever encountering. One example is the TAG Heuer Monaco V4 which used a belt driven transmission.

My Carrera pictured alongside the truly astonishing Monaco V4.

This time piece blew me away at the time for I myself shortly after bought into the brand with a Carrera after being gifted a stunning red Formula 1 Quartz watch. This same team at the R&D Institute headed by Guy Simone of the LVMH Watches Division gave us the revolutionary Zenith Defy Lab after the printing of this book. Other oddities covered range from the aforementioned resonance movements, electronic rate meters that adjust hairsprings that ensure that the watch is not running fast or slow on demand, to mechanical altimeters and depth gauges.

The last complication is one that is dear to me. I actually considered getting the very Oris Aquis Depth Gauge on several occasions, pictured on page 157. The only reason why I managed to practice any restraint, even when the watch was being offered at a 40% discount two weeks previous to this writing, was that I already have a Oris dive watch which accompanies me on every dive, and nearly everywhere else. Already having three depth gauges as a part of my dive trim, made a fourth gauge a little silly and excessive as well. 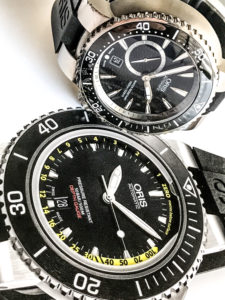 On the more likely chance the you are a potential customer that simply wants a book with lots of pretty pictures, I doubt you will find a better book than this one. However, every high resolution picture and illustration is presented with a purpose. The task of getting the pictures alone must have been a lengthy and painstaking one. An example is the section on watch hands on page 282. Mr. Schmidt masterfully illustrates the most common types of hands found and to which watch brand they belong to. Everything presented in this book is not without a purpose. There is no waste here.

Therein lies potentially the books biggest problem. As a result, this informative book would make a great coffee table book, but can also be confused as nothing but a book that should be leafed through casually by a guest while waiting for dinner.

“The Wristwatch Handbook” has a lot to offer for everyone. From novices to those who collect many time pieces a year. Some that collect to the point of their financial and near marital detriment may however meet their respective dooms, for this book will definitely inform you as to the many holes in your collection. If you are one of these collectors, tread carefully.