Recently, I have had two watches come up for service and my experience has been mixed. I will not go into detail of the brands and watchmakers involved for in each case big companies were involved where one person made a mistake or acted in poor taste, and in my opinion their actions should not reflect poorly on an entire organization. 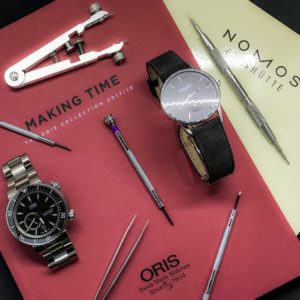 With that out of the way, one case in particular is the topic of today and exactly as to how it is going to change my behaviour as a consumer of this industry. This one watch’s chronograph second hand started skipping every now and then, so I decided to take it into service at first to the brand itself, second a watchmaker through a brick and mortar store, then finally to an independent local watchmaker. The first two demanded and one rudely told me that it needs a complete overhaul since it was a 9 year old watch, and quoted me prices that were up to 25% of the watch itself. This watch was not a daily worn watch and has lived a very sheltered life and was keeping to within +7 seconds a day, so I was suspicious about their claims. I took this watch to a local watchmaker who is trusted by many within the WIS community, and all he did was readjust what he called the “wig-wag” wheel and the watch is working flawlessly again. This for less than the price of a bottle of Amarone.

After speaking with the gentleman who gifted me his Oris and a few others who have serviced their Nomos time pieces, I think I am going to stay with these two brands from now on. Not only have their prices and customer service been exemplary, the quality of their time pieces is nearly equal or superior to the other brands whose watches retail up to 5 times as much for similar models. The fact that some use more advanced escapements, rhodium plated movements, exotic materials, and are inherently more complex understandably adds to the cost of the service. In this case however, the watch which was fixed in under ten minutes was housing a common and slightly modified ETA movement.  Also taken into consideration is the fact that I can easily swallow a $300 service for my Oris or Nomos every 4 or so years, but doing the same at multiples the cost for my other pieces for the same service is harder to justify. Especially when a couple of them do not house said complicated movements. After writing this piece I also had many conversations with watch collectors who told me about their shared experiences where major brands and watchmakers tried to take advantage of them in similar manner.

I have come to the realization that I now use my mechanical watches mainly as tools and not jewellery because I am a certified idiot. Thus I have decided to only take my Oris diving and not some of my other dive watches because I can personally stomach servicing it every 2-4 years of heavy use, knowing that I will be treated fairly and honestly and won’t need to be afraid of an unexpected bill. It would prove beneficial for some in this luxury space to realize that we the consumer are not uneducated and willing to throw what ever money you demand simply because the watch is deemed to be a luxury item. Lastly, thank you to Oris and Nomos for not only making great usable time pieces, but also ensuring a peace of mind that allows us to use them to their fullest potential.

Since the writing of this article, a few other watches required attention including an Oris, and unfortunately these were learning experiences that have tarnished a brand for me and I highly doubt that I will every purchase a watch from them again in the future. This is not because of their product not being a quality watch overall, but mainly for how Oris’ service is set up, and how they treat a customer if they have a genuine concern which highlights a design flaw in the watch. The watch in question was my Oris Titan C and the fact that the newly purchased rubber strap extension was not even long enough for my wet suit. This problem is amplified with Oris’ poor design decision to incorporate unique horn lugs on their professional divers and that of their Aquis series. This essentially forces you to only use their straps and not a bespoke one. Furthermore, recent watches have unique screw heads which require a special Oris tool to use. One can only imagine having to simply leave their watch at the dive site if there is an issue with the watch while in a remote location. This is simply not acceptable for a watch that is supposed to be a tool. After filing a support ticket (no direct way of speaking to someone was even an option and there are no service centres located near major cities such as Toronto like that of other brands), it took nearly a month for them to respond. When they did respond they also gave the authorised dealer for which I bought the strap from some grief. I abandoned my request for I did not appreciate how this was handled not only by the support team, but of the directors at the C level, which I received confirmation that at least one of them was aware of this case.

The lesson at the end of the day is that if there is something wrong with your watch that does not require a full service where you will have to pay out fo your own pocket, expect to experience some grief regardless of which brand you are dealing with. These companies regardless of what their marketing campaigns attempt to communicate are simply concerned about their margins. They are not concerned about their charitable contributions or how your experience is with the watch as long as you do not write about it and prove their campaigns to simply be there for marketing purposes and to get you to purchase their watch.