A week ago, I again witnessed a sight that had once filled me with horror. I saw explosions again as Russia invaded Ukraine. It mirrored the nausea I had felt during the first Gulf War seeing images of air raids in Kuwait. This nausea was due to trauma as a child witnessing such air raids in person.

Usually when the air raids started, it was a fun event for that particular four-year-old. His family would quickly turn off all the lights, gather the handful of bags that were filled with the bare necessities, and they would then make their way for the covered parking lot of their apartment. The men of the building would proudly stand outside and watch the light show of the anti-aircraft and missile fire in the night sky, and occasionally the boys made their way to the side of their fathers to watch the lights, much to the chagrin of their mothers.

On this particular night, things were different. Memories have an odd way of evolving, especially when an important moment is imprinted on a very young child’s brain. It was not until recently being reminded of this evening by my parents, that I knew what I recalled on that night was true. It was the first time that I grasped the idea of death on a large scale and how unforgivingly random it would be.

My family was huddled in our small sedan when suddenly my father stopped the car and turned off the lights. The entire capital city did so as well, blanketing the city in darkness save for the streetlights in sectors where they could not be turned off. I had excitedly turned around to view the light show of the of the air raid. When I turned back around, I was greeted with the faces of parents who tried their best to hide their anxiety from their young children. Being out in the open and on a major street was too much, and I could read the severity of the situation in my father’s face. I knew that everything I knew could come to an end that night, and I was terrified.

Across the small yet vast community of watch enthusiasts, I witnessed a reluctance to participate in the daily activity of taking a photograph of one’s wristwatch and posting it on social media. I too was reluctant to do so, understandably so. To many outside of our community, the act of taking a wrist shot is usually viewed as a selfish activity which is solely done to show off our status through our timepieces. Granted, this is true for some, but for most and for those whom this article is directed toward, this could not be further from the truth. By citing a specific moment in history, I want you to continue to take wrist shots and to document your life and personal history. 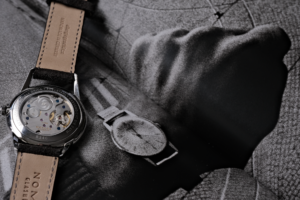 This specific moment in history was on 12:22 PM on August 22nd or 23rd of 1968 when the Soviet Army came into Wenceslas Square in Prague. This was two/three days after the Soviet invasion of Czechoslovakia started. The exact timing of when the photograph was taken is not precisely known, for Koudelka himself (the photographer) was reportedly on the run from fear of being caught by the Soviet forces, thus abandoning many rolls of film. Film backs had not been invented yet which printed the date on photographs, so Koudelka resorted to taking a photograph of his wristwatch to note the historic moment. Koudelka was quoted as saying that he wanted to capture the few Russian soldiers in the abandoned square with the time, but due to the parallax error on his Leica M rangefinder camera, the soldiers were behind his hand and thus not captured.1 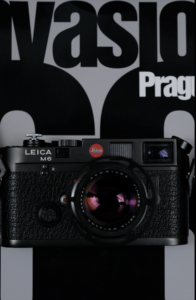 The parallels of the current invasion of Ukraine and that of Czechoslovakia in 1968 are alarming and show exactly how much history matters, and how it tends to repeat itself. Today’s invasion of Ukraine by Russia was influenced by the growing tendency of the Ukraine turning more towards the West and toward NATO, and today it officially applied to join the European Union as it is being violently invaded. 1968’s invasion of Czechoslovakia was undertaken for the very same reason. 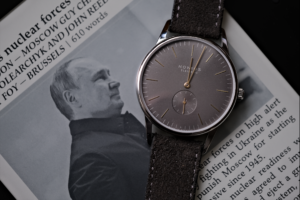 After two decades of social and economic degradation behind the Iron Curtain, in the 1960s Czechoslovakia opened its borders for tourism for a much-needed source of money. Unfortunately, many Czechoslovakians also travelled and marveled at the standard of living in Western democracies. Upon visiting West Germany, screenwriter and film directory Pavel Juráček wrote, “I had a terrible urge to cry. It seemed I had come from the Stone Age… I understood that something monstrous, something terribly absurd, something unfair was happening to the country in which I was born.”2 Shocked at trains that ran on time, sinks that worked, overall cleanliness, and the politeness of not only West German citizens, but of the police stunned him. This experience was exactly what my father experienced when he travelled abroad as a young professional for work. He was astonished by the architecture and freedoms that people enjoyed. We managed to escape our country of origin as it was thrown into a savage war. This country is still under a totalitarian regime to this day, and I have not been back since I left as a child. Czechoslovakia had been under the rule of the accidentally comedic yet brutal leadership of President Antonín Novotny who enforced the Soviet system of government on the country. This system relied on three pillars of government to control every aspect of life: the army, the secret police, and the courts. However, in the spring of 1968. free speech had unexpectedly taken over the country, and the Soviet Union noticed and declared the situation to be a ‘counter-revolution’. As the months marched on, and the public desire grew towards what was then called a ‘Social Democratic State’ which married democracy with post-war Soviet values, the Soviet Union invaded Czechoslovakia on August 20th, 1968. They did so to keep what is still known as the ‘Soviet/Russian sphere of influence’ intact.

This photograph has prevailed over the decades because of its power and the history it captured or tried to capture. But history is ongoing and takes place on many scales. The act of documenting your daily commute to work or back home from a long day at work with a wrist shot, or exactly what you were doing at 10:10am every day has its importance. It is a record of your personal history, and that is a beautiful thing. Your personal history matters. It is a window for the following generations to see what life was like in the past. Taken in aggregate, it shows how life was impacted worldwide by events. In some regions people still enjoyed going on vacations. In others they were faced with protesters who were protesting vaccine mandates. In other regions all posts became about how their land was being overrun and occupied by a foreign army. There is no shame in residing in any of these regions, and it should not stop you from documenting your life and sharing it with others. You may one day look back at your seemingly mundane photograph as the last day you lead a normal life. It may have been the last day before your country was thrown into an unprovoked war. 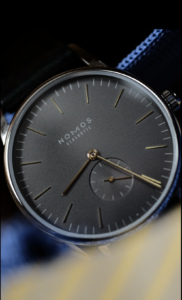 Furthermore, the watch you choose to wear can have added significance. Ever since the American insurrection at their Capitol on January 6th, 2021, this Nomos Orion 89 had gained significance for me. As a nine-year-old child I remembered staying up late to watch the scenes of the Berlin Wall falling. Its significance was not lost on me, for just like Pavel Juráček, I knew firsthand what living in a non-democratic and oppressive society meant. Nomos released their popular Orion model with the dial colour “November Gray” named after the pigment of the Berlin Wall. I had purchased this timepiece many years ago simply because of this connection, and it continually proves its significance today. As on the 6th of January 2021 in the States, and of last month’s protests in Canada’s capital and important border crossings, democracy came under attack. Calls to overthrow the government here, or in last year’s case in America to stop the peaceful transition of power frightened those of us who lived under oppressive regimes. Personally, I wear my Seamaster to mark occasions simply because it can go with me everywhere. This includes deep underwater, and unlike the Nomos, it has the water resistance to put up with the constant hand-washing and decontamination procedures due to the pandemic and taking care of those with repressed immune systems. As a result, it has been with me during some of the most meaningful moments in my life, and some of those moments were captured with a camera. 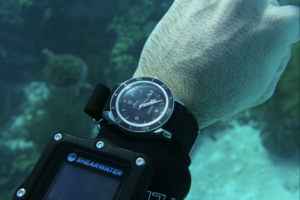 So to you the watch enthusiast, I implore you to not stop documenting your life through the lens of your enthusiasm. If you want to do so in a more mindful manner due to the global situation, then do so. On platforms such as Instagram, write more meaningful captions to accompany your photography if you feel like the act of the wrist shot has lost meaning for you. You may never know the significance your photograph captured until weeks later. Your life and how you document it is important, and do not let anyone tell you otherwise, for it is none of their concern to begin with.

Note: if this article has sparked your interest in seeing documentary photographers working today, especially in Ukraine as the invasion is happening, look into these photojournalists on your various platforms: