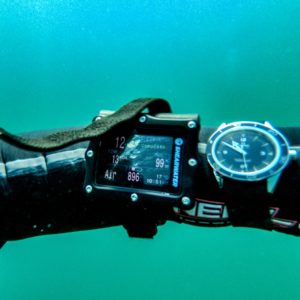 “So how much is that watch?” asked the Divemaster who was already out of breath from putting on half of his drysuit. I looked down at my Seiko and told him the truth, and he paused, staring at my wrist as if it had been responsible for all of his poor financial decisions to date.

“I would never go into the water with a watch. I’ve lost so many over the years,” he responded as sweat continued to trickle past his brow and straight into his open exposure suit.

“Well, were they fitted on bracelets or straps,” I asked, wondering if we were ever actually going to enter the unseasonably warm water.

“Both,” he snorted, as he attempted to slot his right arm into the sleeve.

As I tried to help him into his suit I knew then that I should cancel the dive. Regrettably I kept quiet and continued. If someone is not familiar with how compression at depth affects one’s equipment, and that everything strapped onto your arms and legs requires monitoring as you descend and ascend, he or she should not be leading the dive.

For this reason, and many others as I would soon learn, this would become one of my worst dives in which no injuries to occurred.

Needless to say, myself and everyone I know personally and professionally, have never accompanied this Divemaster on another dive since then.

What are these straps and who are they for?

I never liked dive watches until I actually started diving. As I started getting into the hobby, I decided that my current dive watch and daily companion should be adorned properly for its intended duties. Thus I started my search online and on eBay I found a seller who made fully customizable rubber NATO straps. Little did I know that Alex Moss of Yellowdog Watch Straps would be the craftsman responsible for my watches faithfully participating in my every activity for the next four years.

After specifying my wrist diameter and needs, I ordered a couple straps when in reality I only needed one. The one strap which I used on a near daily basis outlasted the Omega Seamaster 300 Master Co-Axial that it was strapped to.

Yes, that is correct. This strap will outlast your mechanical watches before they desperately need to be serviced and/or fixed.

At first, a custom rubber NATO strap from Yellowdog Watch Straps will obviously smell like rubber. For some reason other watch enthusiasts expected it to have a vanilla scent like an IsoFrane or those made by Oris. As the strap ages through use however, the rubber smell slips into the background and is barely noticeable.

Through very extensive and aggressive use, I never experienced a tear, fraying from the sides, or any indication of damage. This after four years of what most of my friends would call downright abuse. These activities included road running, diving, trail running, and doing extensive home renovations and yard work.

The strap did soften slightly and has become the most comfortable strap I have ever worn on a watch. Cleaning the strap could not be easier either. I simply washed it with dish soap whenever it needed washing. Naturally this strap is the perfect choice when I have to put on layers of sunblock and/or bug spray.

As a result of all of this, this rubber NATO became the default strap for my Omega and now that I have stopped wearing the watch I can honestly say that I miss wearing the strap more than the watch itself.

This goes to show you what reliability means to consumers when a $35 strap gains more loyalty than a $7500 watch. 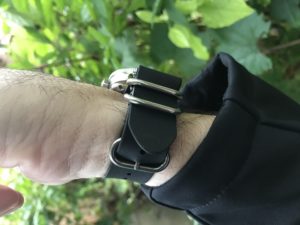 Throughout the dive the Divemaster scraped his drysuit on the bottom, and kicking up silt everywhere he went. After I signaled him to hover, he nodded and continued to scrape along the bottom. Upon reaching the wreck he made contact with the now torn-apart vessel and all of the organic life that had attached itself to the disintegrating hull.

Realizing this, he pumped too much air into his drysuit and shot up ten feet before slowly returning to the bottom. Thus resulting in an expanding cloud of sediment reducing visibility to a mere two inches for the next minute.

After the dive I asked him about his familiarity with his suit and he admitted that he had never worn such a suit before, and refused to pay for the drysuit certification since he knew what he was doing. 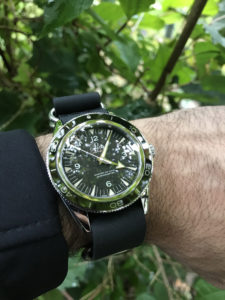 Diving with a drysuit requires vastly different techniques from a wetsuit, for you’re adding air directly into your suit and no longer relying on the amount of air in your lungs for subtle changes in your buoyancy. After describing this to him, he again blankly looked at me while being drenched in sweat.

“I’ve been doing this for over seventeen years. I know what I’m doing,” he replied, as he noticed a small tear in his brand-new drysuit. His vacant expression grew to a focused frown as he looked downwards.

In a sport where the best are women and young adults, there is no place for machismo. If you are starting out or ever come into contact with another SCUBA diver who immediately asks you “How deep have you gone,” know that they are not a quality diver or person. Personal bests such as depth have no relevance to the quality or difficulty of one’s dive. Those who think they do are in the hobby for the wrong reasons and probably lack the capacity to ever be a good dive buddy.

When ordering my many straps from Yellowdog, I also ordered extra-long straps for use with a drysuit and a wetsuit. They all performed admirably and needed very little adjustment throughout the dive.

As my exposure suit compresses while descending, I would slide the watch and two dive computers along my arm towards my elbow, where my arm’s diameter is naturally larger. While ascending I would return all the strapped gear back towards its original position in order to avoid “equipment squeeze.” This is when your equipment is too tight and causes mostly harmless swelling and bruising underneath where the equipment was strapped. Seiko gets around this with their brilliant accordion-shaped straps which naturally compress and decompress with your suit at depth.

Other than being mindful of one’s gear throughout the dive, these straps performed perfectly.

For the price, durability, utility, and overall quality I would highly recommend one of these rubber NATO straps not only for divers, but for those who wear their watches during anything more strenuous than the usual daily company meeting that is as useful as an in-law being present during your honeymoon. 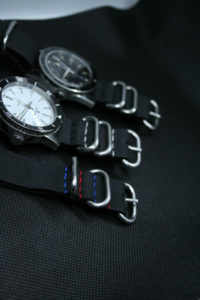 I loved them so much that I ordered many different straps for other watches and even got the stitching customized to match the watch.

You cannot go wrong with having one of these NATO straps for your watch. At this price, it would be foolish not to have one.